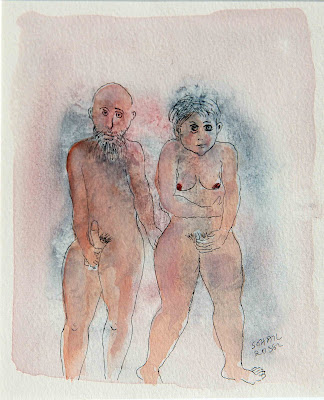 Here is a stunning little watercolour and ink on paper by the senior Pakistani artist Tasaduq Sohail. I love this work as these two figures are drawn so sensitively. We get a sense of their frail nature, of their shyness being naked. It is as if they have been stripped and forced to walk naked. The woman shyly covers her stomach with one arm and with the other attempts to cover up her genitalia. Her old eyes tell us of her fear. Is it fear of us or of her partner in the image, an old balding, bearded man with an uncontrollable erection and a wandering hand. He appears more at ease with his nudity but even he seems to look at us with eyes that tell of the inevitability of his lecherousness, like his lust is part of him that he cannot rid himself of, even if he wanted to. Sohail re-envisions Adam and Eve as a pair of OAPs, pathetic, frail, fearful and laid bare. 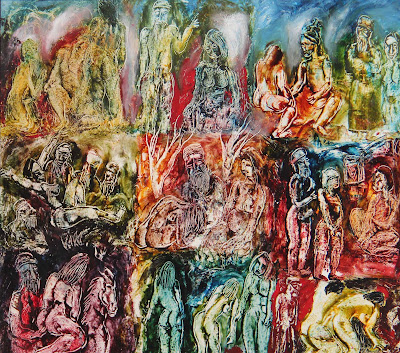 Click for more works by Tasaduq Sohail
'Untitled' (undated) byTasaduq Sohail
Oil on Board
18 x 14 inches
SOHA0071
This is an oil on board painting by the 82 year old artist Tasaduq Sohail from Pakistan. Though undated one would imagine this dates from the late 70s to the early 80s as the set of work of which this was part all dated from this period, owned by an ex-girlfriend of Sohail from his time in London. I remember seeing this oil uncovered before me and knowing immediately this would one day be a spotlight work at a retrospective of the artist at say the Tate Britian or the National Gallery. His work already resides in the Victoria and Albert Museum so maybe it will be there that it is shown.
What are we looking at? We are seeing a classic multi-image work bySohail. Nine different scenarios in the same pictorial space reminding us of the kind of multi-narrative religious pieces created in the Renaissance and earlier. Here Sohail divides these scenes evenly in the space through squares of different oil colour. Into these base colours, applied roughly and unpreciously to the board, he adds new colour highlighting areas over others. These areas come to suggest imagery to the artist, which he describes by rubbing/removing paint with a rag or indeed by drawing with the reverse pointed end of the brush. The final piece is unlike anything we have seen before. A messy foray of colours, held in nine boxes that bleed into each other irreugularly and unpredictably. Is the artist implying by this that all these episodes are happening simultaneously? It is hard to tell. Why have them on the same board where they interrupt and distract from each other? Is there an order that we should read them?
None of the works appear connected to each other apart from the overarching theme of the abuse and the subjugation of women. The centre box shows a Mullah being relieved by a woman whilst a pregnant woman looks on. To the left of this box a woman displays her naked wares whilst four bearded men inspect her body lecherously. It is a classic Bathsheba scene. In the top right box a couple stand to a side whilst a naked woman is in conversation with a seated man. Are they her pimps selling her off? Or are they happy parents giving their naked daughter to a man? The woman looks pleased for the episode to be happening either way. In the bottom left hand box a man gropes a woman as she rides a horse. Is he a tutor taking advantage of his position of pwer? Woman are nearly always shown naked, whatever the scenario, the object of men's sickly imagination. Sohail's work is very much concerned today as it was in the 1970s with the position of women in his home country. In works such as this he is releasing people from sexual repression yet pointing the finger accusatively at men who abuse or take advantage of women in Pakistan.
For more works byTasaduq Sohail, click here.
﻿
Posted by Jana Manuelpillai at 03:33 No comments: