Read about two works by S. Ravi Shankar in his coming exhibition titled 'BACK TO HIS CHILDHOOD' @ The Noble Sage Art Gallery

S. Ravi Shankar is certainly one of the most popular and impactful artists in The Noble Sage collection. His 2010 solo exhibition was just as celebrated as his two previous showings at The Noble Sage Art Gallery in 2007 and 2009, both selling well globally as well as to London buyers. This continued appreciation has much to do with the conceptual meanings and visual vocabulary behind Shankar’s work expanding and self-elaborating, giving audiences (consciously or unconsciously) reasons to go back again over the material: both within the show during a visit or in terms of a second and third visit to the exhibition, or else go over areas again during the one viewing of a single piece, or in some cases even buying more and more work to get a better grasp on Shankar’s art and its meaning. The complexity of Shankar’s visions are becoming increasingly cryptic, layered and cross-referential. As a patron, dealer and collector of Shankar’s pen and ink drawings for six years, I am starting to see that this artist demands viewers to use nothing less than an investigative eye to get the most from his work. We must constantly piece together clues on the surface and between surface levels. The process is often much like trying to complete three monochrome, half-complete jigsaw puzzles whilst they are laid on top of each other and all at the very same time. And then seeing how the images emerging relate to other similar puzzles nearby…. Not easy.


This exhibition made up of eight new works and a selection of other older works by the artist, together transports us to Shankar’s childhood, a place now rather familiar to us from his oeuvre over the last five years. This time however, we are given a deeper picture of specific moments from his past: being carried by his father as a child, standing next to his mother for a family picture, his schooldays as a kid etc. Images begin with Shankar’s photographic recollection of moments from his childhood. Rarely does he move to look for actual photographs. He only needs to consult his own mental filing system to find the image he wants to remember on paper. These images become the template for his exploration of that moment in pen: its relationship to him today, its meaning for him at that moment in his past, its meaning for others in the image, his relationship with others in the image then and now etc. Although on the surface ‘I’m thrust… back to my childhood’ I (2012) depicts a fairly realistic grouping of the artist and his siblings around their mother, we note on further inspection that this work explores the psychology of his family in relation to the artist. The artist as a child in the front of the group seems the subject of restraint – his mother’s hand pulling him back from the shoulder (perhaps roughly) and his sister lying a hand firmly on him, perhaps to control him. His brother, Bhavani, who sadly passed away recently, holds onto his mother’s arm needfully. 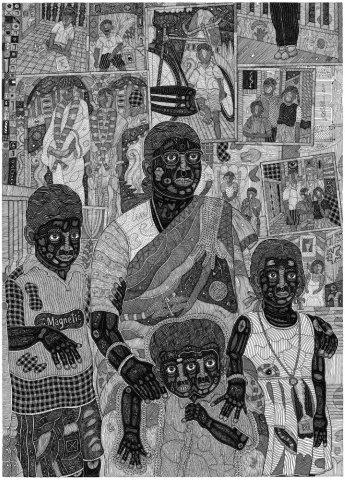 Shankar himself looks out at us whilst the others all look to our right. Those who have followed Shankar’s progression in the gallery will recognise the Siamese two-facedness the artist uses to describe himself in his works. Here we see it again, adding more tension to the work and marking him out as different from his family, adding another level to the prohibition put upon him. This work stands out as it shows the artist pitching his memory of the real (which he understands as subject to error, manipulation and artistic license) with the photographic memory of the real –seen in the drawn collage of photographs in the background, entirely unrealistic as it did not exist but implying that those photographs were real things that happened but in actual fact they were all made up from memory too by the artist. This is combined with the semi-‘trompe l’oeil’ idea that these could be photographs at all. They are of course drawings of photographs. The juxtaposition is a clear proposal for us to explore the subjectivity of history and memory and the exacerbation of this dilemma when it comes to the artist and the artwork.
This idea is explored further still in ‘I’m thrust… back to my childhood’ VI (2012) with this seemingly moving image of Shankar as a child in his father’s arms. The work draws us in with its reality first and foremost. We are lulled in by the execution of the father’s very Tamil-looking sarong and his classic white vest, his thick, big black spectacle frames and the closeness of the father’s hug of his child to his face and body. We project warmth and affection into their relationship. It is only later that our eye lifts from the couple and moves to its compositional partner, the background that makes up half the total image. What we view immediately contrasts with the father and son depiction. A menagerie of macabre objects take us by surprise as they are so incongruous with South India and, more particularly, the described to the left. A strange winged eye (perhaps symbolic of the ‘evil eye’ of others’ jealousy and envy is embroidered into one shelf. It seems to not sit but hover somehow on the shelf, unlike the Tamil Nadu rural religious carving to its left and the two faced jar above and the sleeping cat below. Indeed this cat is quite different from the bizarrely still feline on the higher shelf which looks stuffed in comparison. To the left of this taxidermic creature a hand comes loose eerily from the wall and extends around the shelf’s interior partition. Our eye moves upwards and we see two jars: one holding a small human sunk under liquid, the other triplet babies still in their womb, also in liquid. Whatever sentimentality and nostalgia was created on the left of the image is shattered by the right side. In truth both sides seem in themselves believable but when put next to each other become unbelievable. Yet this is the reality that the artist depicts for us, one that he asks us to trust in. 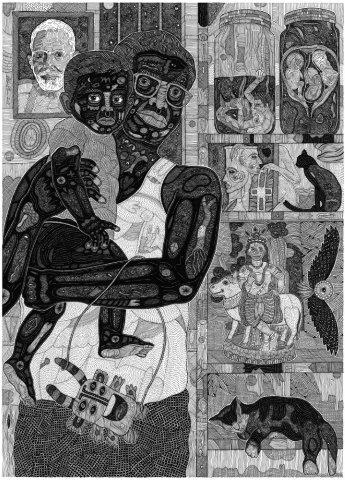 We realise that the knitting of these two divergent realities is very clever indeed. The sleeping cat, in its sentimental cuteness, we take to be out of step with its surroundings on the right side of the work. It should be on the left perhaps… Likewise, Shankar sows in a major item into the left side of the work that in many ways is better suited to the other side. This is the puppet/bag/purse/toy item that hangs from the father’s arm. I asked Shankar about this item as it is so prominent in the piece. I asked whether it was a toy from his childhood or else a bag of some sort? The artist surprised me with the answer that this ‘thing’ was completely made up. He has never owned, seen or thought of this ‘thing’ before. It came to him as he was making the drawing and in essence related to the slanderous thing him and his friends called a teacher once upon a time when he was a child. It was obviously awful as he would not even repeat it to me even now, decades on. He had added it into the work on instinct as it related to him then, even though it was not as literal as its surroundings, and rather than hide it, he had made it prominent. So obvious that one doesn’t notice it or else makes automatic allowances for it that it is a toy, a purse or else that it has some South Indian association that we would not understand. Far from it. Only the artist could tell you what this item is. Shankar shows us how even when our belief is strong that we know what we are looking at, we do not. He meshes the real and the unreal, and transparently over this he merges the noticeable unreal with the unnoticeably real. Again we are reminded of my earlier jigsaw puzzles analogy. It is no surprise that Ravi Shankar’s work demands many eyes, many visits, many viewings each visit, many conversations and many purchases to extend those viewings over many years and between many works simultaneously.
For more works by S. Ravi Shankar, click here
To find out more about S. Ravi Shankar's new solo show at The Noble Sage contact the gallery on info@thenoblesage.com
For more works by S. Ravi
Posted by Jana Manuelpillai at 04:41